For “Resistance Is Futile”, Press 1 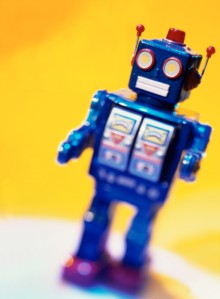 Let’s face it, we have a very confused relationship with technology. Not just as individuals, but as a species. We are who we are as a species because of the technology we use. Too many other animals are faster or stronger or have more impressive teeth for us to reach the top of the food chain without a boost from technology. If our ancestors hadn’t used tools to shape their environment, this blog would probably be about where to find the best
designer moss for your modern cave life-style. Tools, and technology define us. Tools move civilizations along. Just 100 years ago, even in an advanced nation, most of the things that you could touch were either natural products or made by people (wood, leather, wool, etc.). Today, most of our environment is made directly by machines (plastic, computer parts, software, cell phones). People may still contribute but most parts are directly made by machines, in some cases designed by machines. Computers have become our step-children, and to a degree our competition.

An old theme for science fiction books and movies are technology turning on humanity. Sometimes technology is just seen as evil. Sometimes we think that computer intelligence will decide that it’s better than we are (like Star Trek’s Borg, and their “Resistance is Futile” approach to people management). Of course, “good technology” gives us spaceships to carry us to distant galaxies, robots to defend us against aliens, and every gadget that James Bond ever got from “Q”. Do we love technology or do we hate it? Come to think of it, does technology love or hate us? It’s both… it’s always both. One minute your drooling over your sexy new smart phone, the next you’re cursing it when it runs out of power in half the time as your old phone.

In corporations, hate for technology has been replaced by fear. For decades there was fear that machines would take over our jobs. In fact, the term “robot” was created for a play in the 1920’s were robots took our factory jobs away. Prophetic. But the most robot intensive industry is probably farming. Have you ever seen a farm? Well, the next time you see a big farm with a huge piece of equipment rolling through its fields, you’re probably looking at a robot. It still needs a human driver, but it has multiple computers and a satellite uplink. These machines record information on the state of the crops and weather conditions,  calculate where next to harvest, shrink wrap harvested crops and even drop a radio ID tag into the wrapper for future quality control. In the 1800’s 75% of Americans were farmers, dropping to 40% by the early 1900’s and less than 1% today. Industry followed a similar pattern. In the 60’s Detroit hired tens of thousands of painters, welders and similar trade workers. Today, I don’t think a single painter or welder has a production job in a major
car factory. It’s all done by computer-controlled  machines. Even if people became cost effective again, humans could not do the work at today’s quality levels. This is an expanding trend, and the industry that is most vulnerable is… Outsourcing!

In this month’s Outsource, a UK journal on outsourcing, Tom Topolinski wrote “The Next Big Thing to hit call/contact centres and customer service.” The “Next Big Thing”, according to Tom, is AI… the growing ability of computer intelligence to simulate human intelligence. I agree with Tom. Instead of a fixed menu of “press ‘1’ for this and ‘2’ for that,”
computers are generating dynamic and realistic conversations. Using a human sounding voice a computer asks you why you are calling and can interpret what you are saying. Sometimes the voice sounds a bit mechanical, and it misses the mark in finding the right service. Still, the best AI is better at correctly answering questions than today’s least capable offshore Call Centers. In a couple of years, AI will be twice as good at half the price. People based centers may improve, but not by very much. Costs, however, can be expected to rise.

Does that mean that Outsourcing is doomed? Yes, it does.

At least today’s “traditional” people based “lift and shift” approach to outsourcing. Moving work from one group in one location to another group in another location will still reduce your cost, but only for a little while. IT departments started outsourcing in the 80’s, banks a decade ago and legal firms more recently. In a few years, you will either game the benefits you were looking for or give up. If you get these benefits, you have a few more
years to develop greater efficiency. After that, prices will rise and you will need to compete to keep your best people, even at a higher rate. Outsourcing firms must become experts in process automation if they hope to continue to be viable. Some outsourcers may continue to rely purely on talented offshore staff, but they are likely to only be niche players.

Call Centers are just the beginning. Because call centers have been around for so long, they are fairly mature, well understood and well documented… excellent targets for automation. The corporate move towards Cloud services will make it easier to automate of outsourcing, just as the automation of outsourcing will accelerate the adoption of new Cloud services. The ongoing development of faster and more reliable communications further accelerates these trends. In the next decade top outsourcing firms MUST provide: great recruiting capabilities, excellent training, well trained project managers and business improvement teams and they must be very good at leveraging computer intelligence. Outsourcing firms without all of these capabilities will not be able to compete for the basic projects that make up the majority of outsourcing.

At the beginning of the 20th century modern industry was completely reliant on mechanical “muscle power” to produce goods. In the 21st century we are becoming just as reliant on electronic “brain power.” Traditional outsourcing… moving work from one group of people to another… will cease to be an isolated objective and become just one more milestone in a continuous path towards more efficient work. Computer intelligence is here to stay. At least, that’s my Niccolls worth!