The Return Of The J Curve: A Lesson From Netflix 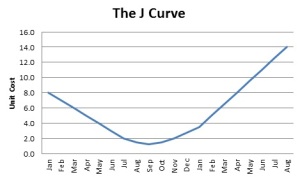 Nothing is free… or at least not free forever. The same goes for the lowest price. Eventually it goes away. Either a new, lower price is found, or the price rises. As the economy continues to rebound, free is no longer quite so free. We all know basic economics: when the economy improves more people pursue goods and therefore prices rise. There’s definitely some of that, but what is unique today is that the definition of free, or unlimited, or “eat all you want”… is changing. The recently announced price increase from Netflix represents more than just inflationary increases. The result is something called the “J Curve.” Imagine a that starts at some point, let’s say it’s the number eight. Then as we move forward in time, the number moves ever downward until we hit a point where it heads up again, and continues upward until it is higher than where it started. J Curves can lead to revolutionary changes when new cost structure, new populations, or new paradigms take hold and redefine how some element works.

Technology based services have for a very long time been getting cheaper and cheaper every year. When the Internet was new, users were mostly in universities that connected through very slow modems, where individuals paid nothing. Free is always a good price; then again the Internet didn’t offer much back then. As the Internet grew, so too did the fees. Hulu was started as a free distributer of TV programming and movies; today it offers Hulu Plus, where you pay for some services. This only makes sense, since you can now watch programming on your desktop, laptop, iPad and smart phone. As functionality increased, the owners of Hulu eventually said, “It’s now worth enough to start charging.”

Netflix has always charged for its services. However, every new rate card from Netflix has lowered its cost structure. They started with sending DVD’s, then they offered DVD’s and streaming content, which greatly lowered the cost per movie because it was cheaper to stream than to mail a movie. As more and more users downloaded movies, the cost per movie dropped and Netflix passed the savings on to their users. But this week that stopped. Why? One reason was that when mainstream America was not yet comfortable or capable of downloading movies, any revenue that a studio could get was found money. Now that Netflix and others download millions of movies every month, studios want much more money for their downloadable content. Another reason is that you can download movies on phones and computers, and increasingly on your brand-new  internet ready big-screen  TV. As long as no one wants what I’m selling, it’s cheap, but when everyone wants it… the price goes up.

Some of you may be thinking, “As always, Mr. Niccolls, you have enlighjened me with your  fascinating description of a macro-economic issue. But… uhhh… why should I care?” Well, you should care because the Internet isn’t just for entertainment. In previous blogs we have discussed outsourcing and Cloud services. Both  industries are heavily dependent on an inexpensive and unlimited use of long distance communications. In fact, the declining cost of technology has been the key driver for both industries. However, as we have all become Internet users we have also become big media users, dramatically increasing the bandwidth we consume. Consider the following:

Will the cost of the Cloud and outsourcing services continue downward, or should we be ready for a new J curve? The improving economy is lessening the downward economic pressures of the last few years, the Cloud has real economic benefits but corporations may take much longer to benefit than assumed, growing bandwidth is offsetting financial benefits, and the current generation of technology providers will not sit by passively while revenues fall.  This mixed and difficult to interpret combination of forces seems to favor an upswing in cost. How much of a rise, and how fast is still a question, but that we are headed upwards seems much less of a question. Just ask Netflix. At least, that’s my Niccolls worth!

3 Responses to The Return Of The J Curve: A Lesson From Netflix