China… the number one location for outsourcing. The world’s manufacturer. But, perhaps, not for much longer. In order to sign the next outsourcing contr

act, China has offered every conceivable incentive. They have even built hundreds of new cities in the anticipation of the next outsourcing project. Still, even China’s legendary dedication to outsourcing has its limits. China must obey the laws of economics, and they exhaust their labor pool. The next employee becomes less skilled and more expensive than the last employee, and productivity falls. China is very aware of this, but the fix for their productivity problem will… once again… rewrite how outsourcing works. Get ready for it! This is the BIG one! China’s latest plan will disrupt outsourcing and change how we work around the world!

Before we examine China’s next plan, we need to understand China’s previous plans. China’s last disruption was to move their economy from agricultural to manufacturing. In 2013 China’s work force was just under 800 million workers. In 2011, only 30% of the workforce was agricultural, down from 70% in 1980. Think about that for just a minute. China moved 320 million workers, and their families, from villages to cities and factories in just 31 years. That’s more than the entire population of the United States. And they’re not done. In industrialized countries just 1-4% of workers are in agriculture. Even if 5% workers remain on farms, another 200 million agricultural workers will transition to factory work, probably in the next 20 years.

Just this movement of works is staggering, but it is only part of their plan. Remember those hundreds of new cities that China built? There have been many stories about “ghost

cities”, hundreds of cities that were built and abandoned throughout China. Reporters who saw these cities a few years ago assumed that these were mistakes, abandoned projects from an overly ambitious central planning committee. Now, as Reuters points out, it looks like those early reports were wrong. They weren’t looking at abandoned cities, they were looking at cities that were still being built, with the residents still moving in. Between 2000 and 2013, over a million villages were depopulated in order to fill these cities. More villages are targeted and more cities are being built. China is still planning, and building, for an economy in  transition.

Executing on China’s economic plans has not come without a cost. The cost of building cities, the cost of new factories, the cost of urban pollution, and the inevitable cost of a successful economy… higher wages. As China continues to win more outsourcing work from the West, workers want better working conditions and higher wages. A year or two ago, Foxconn, one of the world’s largest employers, was constantly in the news. This Chinese firm assembled most of Apple’s electronics. Workers weren’t paid for overtime, worked far too many hours and the work conditions did not meet Chinese laws or their outsourcing contracts. While Apple and other customers failed to hold Fox conn accountable at first, eventually Apple led the charge to fix the worst of their working conditions. And that too has a cost.

How high is the cost of providing a safe work environment? The cost of labor has been rising over the last couple of decades. Generally, offshore inflation is  twice the rate of inflation in America or Europe. Over time, higher inflation will reduce or eliminate the advantage of offshore lower wages.  Today, a factory worker in China is paid about 3,500 Yuan (the currency of China) a month. For anyone renewing a China contract in the last couple of years, you have belt the bump in costs. Especially compared to similar workers in Vietnam (900 Yuan) or Cambodia (600 Yuan). That’s such a big cost difference that even Chinese factories are beginning to outsource work to neighboring countries.

China is well aware that they cannot stay competitive at these prices. Unless… the raise productivity per worker. After all, if the same worker is twice as productive, they cost half as much. Just about every analysis shows that the US has the most (or one of the most) productive work force in the world. Why? It is a combination of skills and advanced equipment in our factories. China has low wages, less skilled workers (on average) and factories with little equipment or automation. According to an analysis by The Economist, China’s worker productivity is just 17% of that of an American worker.

The only way that China can raise productivity to approach American’s levels is to invest in mechanization and automation.  Looking at their progress in agriculture, China has more than doubled the productivity of their farms. Even through the agricultural workforce decreased by 60%, the yield of wheat more than doubled, yielding a total productivity increase for wheat farming of nearly 400%. Much of this increase is due to improvement in mechanization. A typical example of the speed of new mechanization is the improvement of China’s fleet of medium and large size tractors, rising from 1.4 million in 2005 to 3 million in 2008.  These are the metrics driving agriculture, and that will soon drive massive increases in factory productivity.

China is not only dealing with a productivity crisis, they are also dealing with a labor shortage. There are fewer farmers to convert to factory workers, and as C

hina produces ever more complex manufactured goods, a smaller number of ex-farmers have the industrial skills needed to fuel the economy. Here too China planned for the future with a massive push for education, that now yields over 7 million Chinese college graduates (compared to a million in 2000). Unfortunately, China did not realize that these graduates would not be interested in entry level factory jobs. College graduates, and former industrial workers, area headed into the service sector, which created 37 million new jobs in the last 5 years.

Competition from the service sector, limited interest by college graduates and few new workers from the agricultural sector. China needs a productivity boost to just keep up with the current demand for labor. Add to that the continuing rise in wages and competition from the service sector, and China’s manufacturing sector  needs double digit productivity increases throughout the next decade. China’s plan to leapfrog ahead can be summed up in one word… ROBOTS!

In order for China to maintain its title as “the world’s manufacturing center”, they need more than just the mechanical assistance of 20th Century factories. China needs to adopt the newest industrial techniques, and install the latest generation of “thinking” robots.  Installing thinking robots would vastly increase productivity, and make China’s industrial cost of operation competitive with their neighbors.

The country with the greatest robotic density is South Korea, which has 437 robots for every 10,000 workers. China, with just 10 robots per 10,000 workers, is far less productive. To reach parity with South Korea, China’s 100 million manufacturing workers need to be joined by 4.4 million robots. And that’s what China is planning to do. Just one of China’s manufacturers, Foxconn, has promised to add 1 million robots. While they originally planned to have these robots in place by 2015, they may meet their goal by 2020. The problem is that the world’s production of industrial robots is only around 200,000 annually. That’s why Foxconn is manufacturing its own robots, and has installed 50,000 “Foxbots” in the last year.

If (when?) Foxconn installs a million robots, they would have a 1 robot for every 2 workers. Assuming that a robot is as productive as several humans, a super-robotic Foxconn could be as productive as 10 or 20 million average Chinese industrial workers, possibly even more productive. That is a huge influx of capacity for a manufacturing workforce of 100 million. If other firms also install robots, that means that China’s productive capacity could double or triple in just a few years. However, the big  game changer is not that China will convert to robotic manufacturing, but the rate at which it will make that change.

As we have seen with the construction of cities, and the conversion of agricultural jobs, China does not wait until demand builds up. They plan in advance, and they implement in advance. With a cost per worker 4 times higher than nearby countries, they already have a crisis. Raising productivity by 4 times requires million 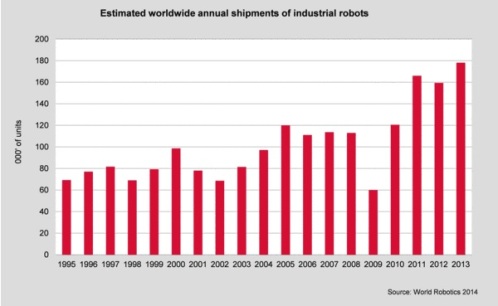 s of robots. That much new capacity means that the real cost of outsourcing is going to plunge, firmly re-establishing China as the world’s outsourcing center. Every manufacturing site in the world will need to increase its productivity to keep up. American workers will still be the most productive in the world, but offshore sites will close much of the productivity gap, while still having a much lower cost per hour. With a massive increase in global productivity, there must be massive layoffs in China, or outsourcing to China will exponentially increase to match the new capacity, pulling tens of millions of jobs out of America and Europe.

The robot revolution has begun, and the new generation of intelligent robots are flexible enough to expand into new territory where robots did not previously compete with humans. At the same time, new robots are much less expensive. The old robots cost hundreds of thousands of dollars to buy and program, and were too dangerous to work in a human environment. Today, a robot can cost $25,000 or less, and any worker can “teach” it a task, literally showing it what to do, just like any other worker. No programmers needed.

Robots can move into virtually any business, including small businesses. Once robots learns how to perform a task, that knowledge can be uploaded to an entire location or it can be duplicated around the world. That’s a big advantage over previous offshoring, where it took years… if not decades… to build training programs, train new workers and give them time to master skills. Remove the constraints of training and robots can take over functions in a fraction of the time “old” outsourcing took.

Faster, Cheaper, Better. That’s the mantra of outsourcing. It’s also the triple constraints, or golden triangle, of any improvement program. The old logic is that you only get two legs, never three, of the golden triangle. Now, you can get all three. Once the robots start arriving, numbers for these three constraints will move so quickly that only a few outsourcers will be able to keep up with these changes. While some firms will install robots themselves, the greatest impact… during the next 5 to 10 years… will come from outsourcers who bring robots into the factories and the workplace. At least that’s my Niccolls worth for today!

This entry was posted in Uncategorized. Bookmark the permalink.