Robot Cars Pick Up the Pace In Florida! 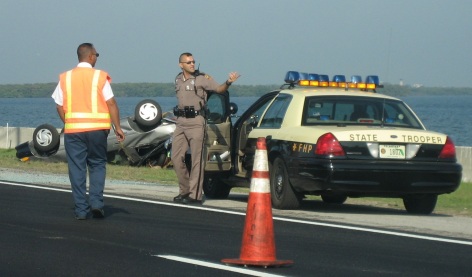 We’ve talked about robots and self-driving cars for a while now. You’ve seen articles and videos showing cars driving themselves, but these are test vehicles. While we haven’t yet reached the tipping point for the robotic car, 2015 may be the year of the semi-autonomous vehicle. This year’s cars have self-parking features, autopilot (far more than cruise control) for lower speed and traffic jams, blind spot detection, robotic braking in emergencies (i.e. a child running out on the road), correction to “lane drift” (perhaps because the driver is falling asleep), and of course a variety of cameras and sensors that further assist in the management of your car. As the New York Times points out, if you put all of these features together, you already have a fully robotic car. However, most high end cars that offer these features “a la carte”, are reluctant to merge these features and remove the driver from the center of the car driving experience.

Not surprisingly, driving for driving’s sake is not the center of car automation. Instead, it is driving as a business that is at the forefront of the robotic revolution. Florida has announced that semi-autonomous crash trucks will be rolling to work sites in just a few months. Let’s break that down. First, if you are not familiar with the term, a crash truck is a truck that follows a road construction crew… often on a highway. While the work crew rebuilds the road, the crash truck hangs back at the tail end of the construction (i.e. it’s the

Second, anyone who regularly works on an active roadway is in a dangerous profession. If I were to ask you, “What is the most dangerous profession: police officer, fireman or garbage collector”, which position would you pick? Most would think it is the police officer or the fireman. After all they have such dangerous jobs they need protective clothing to protect them from fire and weapons. Yet it is the garbage collector that has the most dangerous of these professions.

“Garbage Collector” is one of the 10 most dangerous jobs in America. Why? Because they work on the street, and their work often causes traffic problems. Drivers get annoyed, and as a result they drive with anger, and kill workers. In 2013 579 road workers (only road workers, not garbage collectors or others), were killed. That means that every 15 hours, a driver kills a road worker. In Florida, the combination of a large population and a considerably higher than average number of vehicular fatalities, makes it a very good place to use a robot crash truck.

My third and final point, is how the crash truck will work. The manned crash truck itself, was a major safety innovation. In a lot of road work, the “work site” is in motion.  Laying asphalt, painting new lane lines or cleaning up weeds on the shoulder or meridian  means that the work crew, must slowly move forward, and that static barriers to protect the crew are not practical. A crash truck has become a common way to put a barrier between oncoming traffic and the work crew. You can also see crews laying down orange cones prior to work starting… often from a platform suspended behind the truck. The life of a crash truck driver is to drive forward a few feet, and then park for 20 or 30 minutes and wait to be hit, drive forward, wait to be hit, etc. Given the job position, the union rates for the driver are understandable. But the cost of the driver and the truck together causes some states to choose more dangerous alternative, such as just positioning a guy with a red flag or just using orange cones and lights.

These robot trucks aren’t yet fully autonomous, but they don’t have to be. A fully autonomous robot might leave from the garage and meet the road crew at whatever location they are working at. This version of the crash truck leaves from the same garage as the road crew and follows the human controlled trucks. Sort of like a baby duck not yet being fully autonomous and following a moma duck around. It knows how to stop at lights and not hit pedestrians or other vehicles, and it can sense the road around it. When it does arrive at the work site, it will simply move forward when the other trucks and equipment move. So it doesn’t yet need any greater autonomy. Yet, it’s good enough to replace a union job.

Step by step, we are getting closer to fully autonomous robot cars. Crash trucks are an early sign, but so too are the individual automation features in today’s high end cars. What’s coming next? No one may know, but we do know that something is coming next and something after that. We will continue these baby steps forwards until we start to see some big changes in transportation. So, keep and eye on this space for the next update, because the robot revolution is already here! And that’s my Niccolls worth for today!

This entry was posted in Employment, Robots. Bookmark the permalink.