The Empire State Strikes Back!

Don’t we just love rebels? Just look at the anticipation for that plucky new groups of rebels in the next installment of Star Wars! In real life, instead of an alliance of rebels fighting for our rights, we have market disruptors trying to change how we buy products and services. Do you make an electric car that people actually want to buy? Maybe you want to launch a startup that launches actual rockets into space? Or maybe you developed an online department store got rid of advertising to pay for free delivery… by DRONES? Now that’s a disruptor! But now, the disruptors are getting disrupted. This week, some of the most powerful disruptors, have been disrupted! What’s going on, is it merely a coincidence or is it just the disruptor’s feeling the power of the FORCE…  of governmental regulation?

I’m writing this on Singles day, the made-up holiday that is disrupting our revered, long established, made-up holidays. Like Black Friday and Cyber Monday. A few years ago, China in general and Alibaba in specific decided to make up its own excuse for a sale. Singles day (November 11… or 11-11). In 2014, on-line sales for Singles day ($9.3 billion) beat the combined Cyber Monday and Black Friday on-line sales ($4.2 Billion), even though most of the Singles Day sales were in China. Singles day for 2015 reached $14.3 billion. Will China’s fake holiday cannibalize America’s fake holidays? Well, here in New York we have struck the first blows against the disruptors! New York’s government Jedi’s want to look back to the past, to ancient days, when Taxi’s were yellow and fantasy football was something on a scrap of paper. Let’s take a closer look!

FOOD: For years now, services like Grub Hub, Seamless web and Menu Pages have made it easier to order take out. Why dig around to find a menu, or to try remembering which restaurant has that dish that you love? Who could have imagined that these helpful services would lead to the dreaded… Ghost Restaurant!  What is a ghost restaurant? It is a fictional restaurant, listed at a real address, but which doesn’t actually exist. The “ghost”  could be a completely non-existent restaurant. That food you’re eating could have been made in someone’s home, and their kitchen would not have been inspected (the City‘s health inspectors never inspect home kitchens). 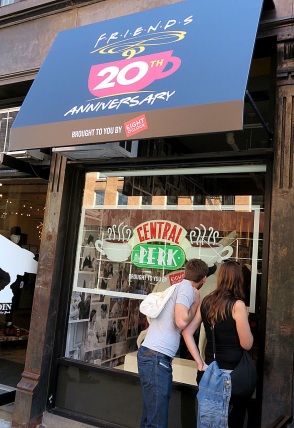 How can you tell? Basically, you can’t… unless you go to the listed address and see if there is a restaurant. After all, the food is delivered to you. If the bag has the right name on it, or if there is a printed menu, how do you know where it came from? Alternatively, there might be a restaurant at the address, but it has a different name. They could have just changed their name and haven’t changed the signs yet, or they could have failed their health inspection or have been hammered by bad Yelp! reviews. Using a new name (while still operating under the old name) is a way of ditching their bad reputation, and low scoring reviews, without changing anything.

The local news discovered this in New York. Now the disruptors are partnering with the NYC department of Health to verify that the restaurants they list are registered with the city.  The same scam is probably happening in your town! If you rely on these disruptors, make sure that they aren’t listing fake restaurants. Although it is ironic, that bad restaurants are relying on food disruptors because they have been called out another disruptor… the restaurant review site!

HOTELING: AIRbnb is the leader in temporary room rentals. In fact, they have been so successful in converting spare rooms into hotel space that they have come under the scrutiny of every major city government in America, as well as many overseas cities. Still, it is New York City with its big tourist and hotel industry, and it’s high rents, that has become ground zero for the battle with AIRbnb. They have been so successful at turning spare rooms and spare apartments into hotel space that neighborhoods with high AIRbnb use are seeing rising rents. And of course, hotels (which are regulated and taxed), are increasingly resisting the rise of this particular disruptor.

AIRbnb got started due to a Federal Tax loophole, that was created for the Master’s Golf Tournament. Lobbyists for the State of Georgia got a rule passed that allows you to rent a room for 15 days without your needing to report it as income. Since the golf course for the Masters is not in an urban area with a lot of hotels (i.e. it takes place in a beautiful, bucolic, wooded golf course) this makes some sense. Before room rentals were an organized industry, little income was reported. However, once you become a multi-billion industry (AIRbnb alone is valued at $50,000,000), regulators and competitors (such as traditional hotels) will catch up with you.

Regulations for “hoteling” vary from city to city and country to country. New York rules include: hotels can only be in areas zoned for hotels, hotels must have fire safety equipment and evacuation plans in every room, hotels have maximum occupancy rules. If you have a very expensive NYC apartment, you are not going to be happy that the apartment next door has 5 or 6 temporary tenants. You’re going to be even less happy if new tenants check in and out every ever few days. In some NY neighborhoods, small apartment buildings with 10 or fewer apartments might have two or three AIRbnb “hotel rooms”.  How does that affect the safety of the other tenants, and the value of their apartments?

Until recently, AIRbnb followed the lead of another major disruptor, UBER, in confronting local governments. Now they are being very cooperative. Cooperative disruptors? Well, their sudden cooperation might have something to do with the NY Attorney General’s report on AIRBNB, which found that 75% of the rooms they rent are illegal. Inside sources say that in early November, AIRbnb sent a letter to New York City to affirm their commitment to local laws; the day before, they sent emails to a number of their “landlords” to tell them that they were non-compliant, and all of their booking (some for months in advance) would be cancelled at Midnight. Did they notify the 75% identified by the Attorney General or just a token few? The lucky few that weren’t taken off of AIRbnb can now tell their guests that they will be charged additional taxes and fees, the same fees that the big hotels charge.

DRIVING: Since we mentioned UBER, they certainly deserve a few words as well. UBER IS perhaps the biggest, and loudest,  disruptor. There is, however, a little question of what they are disrupting. For you and me, UBER as a taxi service. UBER disagrees. They are vehement that they are not a taxi service, they are a software service… that just happens to be used by taxi’s and private car services. And they just happen to have a program to buy cars for their employees. Excuse me, not employees… software customers.  If they were employees, UBER would be responsible for paying benefits, ensuring that minimum wage laws were met and that they dealt with all lawsuits.

Insurance laws differ in every state, so your personal level of risk in an accident will vary. You could fix any insurance gaps by buying commercial insurance, but that is expensive and requires you to get a commercial driver’s license. That means that UBER is not just disrupting the Taxi industry, it is disrupting what it means for the passenger to use a car service.

UBER’s next disruptive move is to replace its drivers with self-driving cars… robots! Tesla just released “Autopilot”, their semi-autonomous car driving software. They expect to release the fully autonomous version in 2-3 years. Other car manufacturers are releasing similar features on their high-end cars. UBER has invested heavily in robotics and wants to be a robotics powerhouse. Why? Because if they replace the driver, they significantly reduce the cost of operation. Also, eliminating the driver frees up another seat in the car, allowing them to more cost-effectively launch a shared ride system (think mini-bus).

That’s a LOT of disruption.  With New York’s fleet of over 13 thousand yellow cabs and 6 thousand new green cabs (picking up passengers in the boroughs and upper Manhattan), and tens of thousands of full-time taxi drivers, the City’s government has plenty of reasons (safety, employment, politics) to oppose UBER.

Will all of the disruptors win? Maybe. Will every new disruptor create unexpected disruptions? Quite likely. Will the future of market disruption depend on how they follow the laws made by big cities? Almost surely! So, keep an eye out for these and other disruptors. They are going to change the way we buy everything from lunch to a hotel room, but even disruptors will learn that some of the rules they’re disrupting are there for some pretty good reasons. At least, that’s my Niccolls worth for today!

This entry was posted in Small Business, Uncategorized. Bookmark the permalink.