Castro Is Dead! So… Who Owns Cuba? 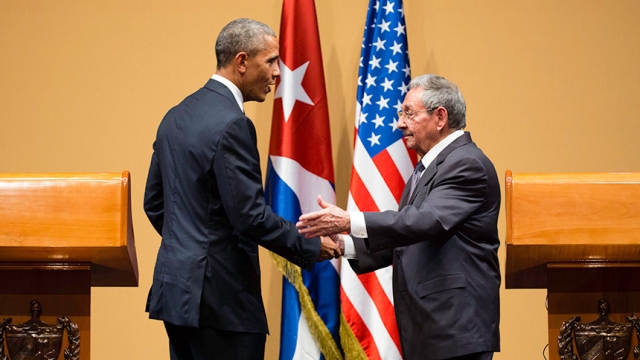 Fidel Castro is dead, and his brother Raul (current leader of Cuba) at a mere 85 years old, must be thinking about his succession plan. For nearly 65 years, Cuba has been quietly sitting just 90 miles off the shores of Florida, enjoying the dubious benefits of Communism. During almost all of this time, Cuba has been under embargo, cut off from trading with most of the world. Now, is the embargo over? Can America really have a normal relationship with Cuba?

Before we answer that question, let’s go back to the beginning of the silent war between the US and Cuba. Why did America create the embargo? In the 1950’s. Cuba had a dictator, President Batista. America agreed that he had to go, and out of the many revolutionaries who wanted to forcefully overthrow Batista, we backed a young and charismatic lawyer by the name of Fidel Castro, and his sidekick Che Guevara. The revolution came, Fidel won, but then something unexpected happened.

The 1950’s and 1960’s was a time of revolution in South America, and the US backed a lot of revolutionaries. Usually, after the revolution, banks reopened, new casinos went up, and the revolutionary (hopefully) became a less bloody dictator than their predecessor. Castro, however, was serious about his promise to divide farmland among the farmers, nationalize banks and corporations, and create a socialist government. 20 years earlier a young and idealistic Batista joined a revolution that made him the President of Cuba, but the temptations of the job quickly turned him into a corrupt dictator. Fidel was determined to be different.

Whether Castro’s government was good or bad, or whether Fidel was a worse dictator than Batista really doesn’t matter anymore. What does matter is that Fidel took a lot of private property and put it into public hands, which triggered the economic embargo in 1958 (expanded in 1962). For half a century, Cuba would be frozen in time, eternally stuck in the economy and politics of 1962.

“Expropriating” private property started the embargo, but the missiles wrote that policy in stone. In 1961 America tried, and failed, to undo Castro’s revolution with our own revolutionaries at the “The Bay of Pigs”. The White House unsuccessfully denied that the counter-revolutionaries were recruited, trained, armed and funded by America. Then, America found signs of Nuclear weapons arriving in Cuba. Foreign nuclear weapons just 90 miles from US territory was completely unacceptable to America. President John Kennedy told the world that it was an unjustified act of war that would trigger a nuclear war. The missiles must go!

And go they did. After very tense negotiations between the US and Russia, it was publically agreed that Russia would remove the missiles and America would give up any invasion plans for Cuba. Privately, America removed its own nuclear weapons that were secretly placed in Italy and Turkey and targeted at the Soviets. President Kennedy was unaware of these missiles, which were probably the real reason for missiles in Cuba. Throughout the crisis, only the US and the Soviets were engaged in negotiations, Cuba was not invited. The Missiles were made in the Soviets Union; Cuba had (and has) no capability to build missiles  or nuclear weapons. The agreement to remove the missiles ignored Cuba.

Yet, the embargo against Cuba lasts to this day. On the other hand, the Soviet union, the most powerful communist nation on earth, closed down in 1992. All but 5 (including Cuba) of the 50 communist nations of the 20th century converted to Democracy, leaving just China as the sole significant communist nation. Naturally, as the most populous nation, with the largest army, nuclear weapons, and a huge manufacturing base, this communist nation is… America’s biggest trade partner.  Yet the embargo still stands for Cuba.

Communism is gone, the Soviets are gone, we’re in a new century, Cuba has not been a threat in half a century and… Fidel Castro is dead. In Miami’s Little Havana neighborhood, ex-Cubans are dancing in the streets. Raul, Fidel’s slightly younger brother, took over the leadership of Cuba in 2011. While he looks a bit more energetic than Fidel did, he doesn’t look that good. Retirement or death is in Rahul’s near future. Then what happens?

Cubans who left Cuba and settled in Florida and surrounding areas are a strong voting bloc, with an almost religious belief that once Fidel died, they would be “compensated” for their losses and suffering. For some, this might just mean being reunited with their families. But many who left or “escaped” Cuba in the early 1960’s were wealthy landowners. They created the political culture of Cuban-Americans, and they want their property back. Later Cuban arrivals were poor and willing to risk death on the open sea for economic opportunity. Not all Cubans have land issues, but landowners shaped Cuban politics in America.

Realistically, ex-Cubans can never be made “whole” again. Families that once owned a sugar refinery would only find a closed factory, crumbling concrete, and rusted metal. If they are lucky! More likely they will find that the factory was dismantled and replaced by someone’s home.

Big land owners? In the 1950’s sugar dominated Cubas’s agriculture, just as cotton did in pre-Civil War America. Cuba was a land of sugar plantations, with very wealthy landowners and many poor farm workers. Plantations broke up a long time ago. The old life of Cuba, as viewed by American tourists, looked like an earlier version of Las Vegas. Away from the City, it looked more like, “Gone With The Wind”. Both images are true, and both have been gone for a very long time.

What can Cuban-Americans expect? Lawyers! Cuba will soon be crowded with high-powered international lawyers looking to compensate their clients for what they lost. Not much land can be transferred because the land now has other owners and other occupants. A little bit of that property might go back to old owners, but not much. The property that Castro took over has been estimated at around $50 billion. If the economy of Cuba recovers, it would be worth even more.

A distant and impotent enemy can be a good thing. Enemies bring together factions. But when the enemy dies, disagreements surface. Can Cuban-Americans be a coherent political force without the dream of a free Cuba? Not all Cubans will benefit equally in coming days. Will this tear apart the unity of Cuban communities? Fidel Castro is dead and Rahul Castro is working with America to undo the old embargo. A free Cuba is almost here. The worn streets and poor people of Cuba tell us the cost of the Cuban embargo. How we’re all going to learn the cost of lifting the embargo.  Only time will tell which is higher.