Is Your Staff About To Run Away? 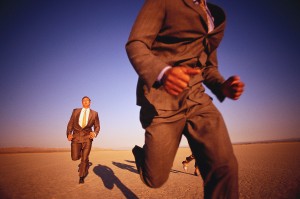 The debt limit nonsense in Washington seems to be over, at least for now. While there are many arguments and much confused information about the national debt, we know that $200 billion of the TARP loans have been repaid, and more is being paid every day. There is softening in Energy, but a downturn after so many months of record prices is hardly unexpected. And there’s always the Middle-East to worry about. Aside from that, there’s not a lot of new news on the economic horizon, and no looming disasters… that we know
of. With no major obvious downturns around, it looks like the economic recovery
is likely to continue. What does that mean for the operations you manage?

First of all, you need to cut through the clutter of information on the job market. Ultimately, all knowledge is local. Having data on national employment trends is useful, but it may not tell you very much about who will quit and how hard it will be to fill your next job opening. Which is what you really want to know. The problem is that without a strong trend in any particular direction, you’re going to hear from one source the economy is up and from another the economy is headed down, and from yet another source you hear that this is the best/worst job market in years. Wouldn’t it be much better if you had your own custom reports on the job market? Well, you can!

Do you have an account with Linked-In? If you do, have you entered all of your contacts? Good! I assume that your contacts are mostly people something like yourself… those that work in your industry, worked in firms that you worked for, held positions similar to your own, worked for you, or that you worked for. In other words, the most important group of people in your world. No single group ever exactly matches the group you want when you’re looking for information, but these will be a very informative group if you want to know what is going on in the larger world that will most affect you. If you keep this group in Linked-In you will get regular information on job changes, promotions and other critical  employment data. For example, every week you get a list of changes (including job changes). In July, I got a message from Linked-In that gave me a semi-annual update on the changes that happened to my contacts.  I counted the number of individuals who changed jobs, and doubled it (since it was for six months) and then compared this to my total number of contacts. Here’s what I concluded:

The Bottom Line: An unprecedented number of employees want to move to new jobs, but the managers I know have more latitude in offering money to new employees than to existing staff… a common situation after an economic  downsizing. That makes for a perfect storm of job changes, not just moves to other firms but also job changes within your firm. After a couple of years of cutting staff and reducing costs, the mechanisms for retaining staff may be rusty and slow to respond. Normally, you can at least expect that staff will stick around until after they get their bonus… but with unpredictable bonuses, not too many employees believe that waiting will be rewarded.  So, get ready to spend a lot of time this coming year as people look for promotions and swap jobs just because they had enough of what they’ve been doing. The increase in job swapping will pressure your resources: more time spent searching, interviewing, training and weeding out bad hires. So get ready for change… and that’s my Niccolls worth for today!